Magdalena Abakanowicz is one of the most important sculptors of the 21st century. She gained international attention at the beginning of the 1960s with three-dimensional textile objects and has devoted herself to the motif of the human body since the mid-1970s. Her vivid sculptures made of bronze, sackcloth, and synthetic resin address, among other things, the isolation of the individual or their merging and disappearing into the crowd, as well as the vulnerability of the human body.

In 2015, the 85-year-old artist looks back on an impressive and extensive oeuvre. For the first time – based on significant solo and group exhibitions as well as permanent installations – this book traces her career as an artist and presents the development of her work with rich illustrations. Personal statements from the artist as well as excerpts from art historical reviews and articles from the last 50 years give a comprehensive insight into her work. Particular importance is attached to Abakanowicz's last major installation »Crowd and Individual« which was shown parallel to the Venice Biennale in 2015 at the Fondazione Giorgio Cini and has been extensively documented here for the first time.

A look into the book

Available works of the artist 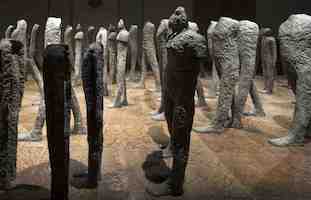 Magdalena Abakanowicz, born 1930 in Falenty (Poland), is considered one of the most prominent artists of the 20th and 21st century. The exhibition at the Fondazione Cini focusses on her seri... 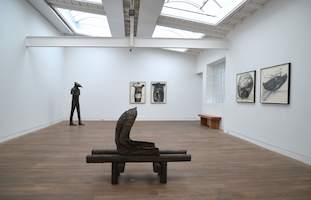 Magdalena Abakanowicz. In Honour of her 85th Birthday

Parallel to the Venice Biennial, the exhibition Magdalena Abakanowicz. Crowd and Individual, consisting of 110 burlap figures, is open to the public until 2nd August 2015 at the Fondazione Giorgi...

Follow our activities and be regularly informed and invited.